IR Film Review: YOU SHOULD HAVE LEFT [Universal] 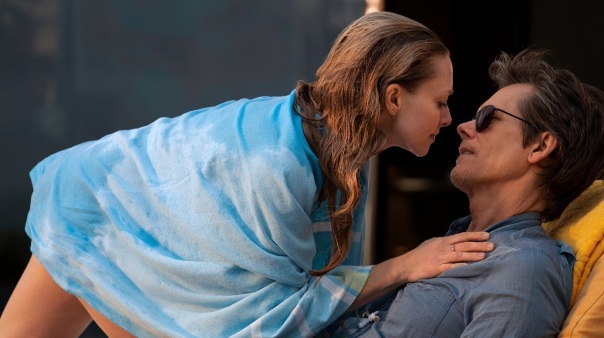 The tendency of perspective and perception is a idiom in movies that usually paints to a metaphor of whether or not a character is guilty of the actions he or she supposedly committed. in “You Should Have Left”, the essence of the Id is a big texture with the characters, male and female. Like writer/director David Koepp’s earlier “Secret Window” with Johnny Depp, it is about reflective insanity that can both be deconstructive but also freeing with certain characters. Kevin Bacon has been known to subvert genre more than a time or two so it can be tricky what angle the character could actually take which is part of why the film works as much as it does. The aspect of such a big age gap with his character and his wife Susanna (played by Amanda Seyfried) works when you understand the mechanics of the story and why that needs to be. It is a bit of a stretch maybe but they both make it work.

The mechanics of the movie are effective. The story is not about any big reveals but it is also not about making it easy to discover what is going on. The production design and the efficiency of structure is quintessential Blumhouse but also Koepp efficiency and 90s style thriller. Making a genre film and on a low budget ultimately depends on the director. Sometimes it can make certain directors really make it work like “Upgrade” by Leigh Whammel. “You Should Have Left” is an apt film but it is neither exceptional nor bad. It is effectively entertaining and a film that definitely has re-watch value, not because there are new aspects to discover but because the mechanics are smooth. Seyfried gets a bit of a thankless role but there is a almost a proxy irony that filters through the story with her. Avery Essex who plays their young daughter is extremely precocious but also an effective actor beyond her years…and yet sometimes one can see her acting.

The film also uses its location to remove the viewer from their comfort zone. The location that fills in for Wales is undeniably remarkable if the location manager managed to do what is seen seamlessly with very few stock shots if any. On the essence that this is a Blumhouse production, it is not necessarily terrifying or filled with horror as one would think but it is a effective concept that can be made to fill a structural base, like “The Purge” or “Happy Death Day,” That is the brilliance of a piece like this and the Blumhouse model because it forces the filmmaker to make it work at a studio level with the budget of an indie. But, as usual, it is always about the right ingredients.

The reality in creating an update of the classic Universal horror monster movies is finding the best balance between true horror and schlock. Bringing in exceptional actors balances the table but with all the digital effects possible, it becomes an idea of how much you see of either one presented here. The texture of the new “Wolfman” revolves around the Victorian basis of position but with a modern twist. The deliverance of the metaphor obviously works back to a father and son dynamic. The psychological references that pepper the picture at many points seem to gloss over this deeper truth. The balance lies in the fact that the film wants to be both adherent to today’s audience but also maintaining its identity to the monster pictures of the past. Inherently this is where it misfires because the naivete of that era and the information personification of our age simply does not gel together. The gore works its intensity well while being more visceral than simply bloody. The best part of the picture inherently is in the asylum but the film does not linger there long. The realization of Talbot, played by Benicio Del Toro, as he is strapped in the chair relating that the people in the room are dead is an inherent turning point. Anthony Hopkins plays his father Lord Talbot, who also has a deadly secret of his own, with the same kind of revel he enjoys in these kinds of showy roles. However the finesse of directors like Francis Coppola in a film like “Dracula” gave his performance in that earlier film as Van Helsing a little more definition. The transfer here looks crisp which would be undeniable coming off a digital negative but for a reason the movie still retains (especially with the exteriors in the country estate) a very film feel. Many of sets in the film are digital extensions but Joe Johnston uses this idea to continuing effect since many of them seem seamless with the exception of the London rooftops. Hugo Weaving plays Inspector Francis Aberline investigating the wolf tinged murders but can do little more at times than grimace at the camera as the character basically is a rivet for moving the plot forward. Danny Elfman’s music of course elevates the picture as well since the central theme motivates the progression. In terms of extras, no commentary is available although the BD does include both the unrated and theatrical version which are very similar though maybe with an ounce less of blood. The beheadings still come rampantly.

The extras, relevant beyond the texture of the digital copy which (with the advent of the IPad/ITouch) is inevitably poignant, rests within the ideals of the craft. “The Beast Maker” involves the considerable talents of Rick Baker who recently did Robert Downey Jr.’s make-up for “Tropic Thunder” but also is known for his initial work on “Star Wars: A New Hope”, “The Fury”, “Videodrome” and the seminal “American Werewolf In London”. Like Benicio Del Toro who is also a co-producer on thW film, Baker loved the ideal of updating “The Wolfman” but it was also the excitement of placing Oscar winning actors like Hopkins and the after-mentioned Del Toro in the middle of the prosthetics but allowing their physical and mental selves to show through that was the real draw. “Return To The Wolfman” shows a similar penchant which relates mostly Benicio Del Toro’s intense enthusiasm for the character since it was these kind of monster movies that made him want to become an actor in the first place. Director Joe Johnston’s elements of working with Steven Spielberg, most recently on “Jurassic Park III” gave him an interesting but broad understanding of the genre. What is interesting is the persistance of doing the R rating. The differences in moral ambiguity emerge in the deleted scenes and extended endings. The most intrinsic of the deleted scenes which shows a little more humor is an extended run through London though the brevity seems out of sync with the rest of the film. The alternate endings offer different progressions but hardly hark back to the humanity of the character like the eventually used theatrical cut. “The Wolfman Unleashed” and “Transformation Secrets” highlight the stunt work and visual effects integration with distinct detail giving balance to practical versus CGI which is undeniably needed because audiences are handily advanced in detecting lines in the cloth in the modern age. “The Wolfman” also looks distinctly dark on BD if by design giving it a looming presence. In terms of a the film, it bounds as an exercise in good form without being overtly emotional or cinematic. Out of 5, I give the BD a 2 1/2.