In an unusual progression, teasing this kind of book is interesting possibility. Like perhaps “The Martian” as a way to refine the story, this is not a bad perception though the aspect of formatting in the manuscript is definitely off. That said, “A Memory Called Empire” [Arkady Martine/Tor] has the beginnings of an interesting story that brings to mind both the political elements of the “Star Wars” prequels and some of the inner working technology of “Minority Report”. The narrative follows a new ambassador coming down to the city center of the universe which is ruled by a specific kind of society where rules and speech are dictated with certain word use and prose, perhaps as a push to a higher form of consciousness. The lead character Mahit recently has been placed as ambassador for her government after the loss of the one before her. What makes this interesting is that a back up of his consciousness is implanted in her brain through a brain stem “imago” which blends their knowledge. A scandal in terms of what happened before he is found dead builds both inside and outside her head. When she and her local liaison begin to investigate, connections start to unravel. Despite a shaky first few chapters, the story engages she cause of the relationship between the liaison and the new ambassador. However, the essence of world beyond a texture of colors and structures hasn’t quite been fully formed yet but an interesting start.

The essence of a bounty hunter revolves around knowing who to rescue and who to hunt. With “Zero Sum Game” [S.L. Huang/Tor/329pgs] it is a little bit of both. Cas Russell is a lady with a plan and she sees her fights and life within a sense of math. When she fights she can see the geometry of the room ahead of time. This serves her well and make her a little cocky overall but she cannot quiet her mind in the off times. Her mentor is somewhat of a psychopath but has almost a Zen quality about him despite the undeniably vicious things he does. The aspect of a Big Brother corporation run by a woman who can almost reach into minds does not adqequately structure the scope of what the book does which adds to the surprise of its trajectory. The book plays more like a 40s noir where everybody is a bit bad but also a bit good. The characters don’t apologize for who or what they are. Much of the action takes place on the outskirts of LA: the East Side, EL Segundo, etc. Cas doesn’t question her brazen nature but does second guess its intention after the fact. Another character that becomes involved is Arthur Tresting, a down on his luck former cop turned PI. The job both Tresting and Cas are hired on are part of a larger plan to ensnare others. The Overlord scenario plays a big part in what is being shown. Cas is just smart enough to be a nuisance to her employers but even the people who pursue her at times don’t know who is pulling their strings. Certain sequences like a hit on the end of a mountain hill road or the destruction of Cas’ hacker warehouse carry particular resonance. The book plays to the element of control within chaos. The introduction of a second hacker in the form of Checker provides a small basis of humor that isn’t purely gallows. Checker knows they might die in their mission but also knows that he is surrounded by killers (save for Tresting) no matter which way they might justify it. The ending is interesting and definitely ventures into Kubrick or Wachowski territory using the aspect of mind influence. The subject really brings into mind the aspect of what psy warfare would be based on but the narrative stretches the character of Dawna a little bit too far. It could have been pulled back slightly at the end and been more believable but the reasoning and the psychological nature of it seems sound even if it is a little too neat. That said “Zero Sum Game” has a gum shoe quality with the balance of a revenge picture and modern techno thriller that gives it a nice edge. 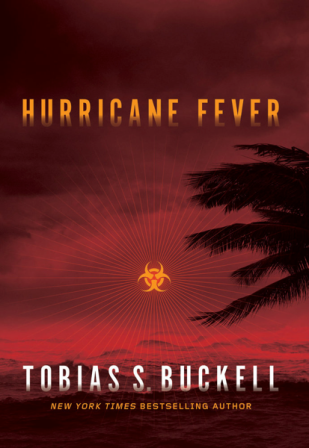 The essence within lawlessness in the Caribbean dates back to pirate times but when dealing with bu,siness across the plain of sea. Despite that precursor, it all comes down to who you know. In “Hurricane Fever” (Tobias S. Bucknel/Tor/272pgs), the dastardly element of a possible bio-terrorist atack spread from a small atoll hoverng between Hispanola and its other islands provides a basis for the tension. The antagonist of this story is Roo, a former spy agent who now just happens to captain a boat (more specifically a catamaran) delivering supplies back and forth across various islands. He cares for his nephew who through extreme circumstances has become his ward after the death of his brother. Meanwhile in Miami, a former colleague of Roo injects himself a serum with a disease into his blood stream because of an unknown reason. This, of course, is fatal and he sends a message to Roo that places everything in motion. The bad guys in question want to have control of the virus and they think Roo knows what is going on. Hence the chase begins. What is the catalyst for another tale of fatalism is that a young woman claiming to be related to the dead man from Miami shows up saying that she wants revenge and believes that Roo has the information that she needs. She indirectly leads the bad guys to Roo’s doorstep. With his training he is able to out maneuver them but his nephew is not so lucky. He dies in the crossfire. This undoes Roo and he becomes a man bent on destruction, Trying to be part James Bond, part mercenary, he makes his way for an atoll where he knows his adversary is waiting. There is some engaging strategy including the secret attack on a fundraiser where the entire city on the island is vaulted on stilts. The girl is revealed to be closer to her target than she’s let on and a battle of loyalty ensues where Roo is given belated authority to carry out a mission under his old auspice. Eventually through battered bruises, gunshots and beyond he exacts his revenge and avenges his nephew. The motivations are not distinctly original and unlike the earlier “Tropical Squall” which also has a boat failing in the possible eye of a hurricane (since it provides dramatic tension), the pulp intentions of the novel don’t overwhelm as much as they should. The thrill at times is there but not with a sense of urgency to make the novel a must read.