With the aspect of “The Umbrella Academy” in distinctive vision with Gerard Way examined within its “Dallas” Quadrant, Gabriel Ba also takes on a structure of decided proportions but one with psychological and operatic visions in his new outing “Pixu”, with colored front and B&W interior (reviewed in manuscript base form). 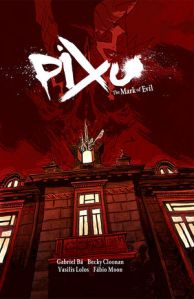 Pixu The story revolves around different intermingling descents into hell within a building that eventually consumes everyone in fire. The axis of evil is never truly revealed in terms of form except that it influences every thread of these people’s lives and make them wretched. The neat angle that Ba uses is turning caricatures against each other. The girlfriend that seems to have a breakdown. An obsessive/compulsive almost rubbing the skin off his bones. An old man caring for his would-be granddaughter. An alone middle aged man sulking in his apartment. The visual style employs streaks of black and distortions of reality in an unorthodox way signifying the empty and wrecked essence of the world. The killing comes swiftly and violently with a dexterity and preciseness that is both messy and chilling. The unraveling of mental stability and the way Ba is able to show this between moments of lucid tangents and the eventual homicidal breaks is jarring and effective. Themes of love, survival and miscommunication blanket the proceedings. The final quarter of the piece is raging with energy like a swirl of viciousness which ultimately leads to a raging fire, perhaps cliche in a way, but fitting as a very viable metaphor. Considering the aspects of shooting teddy bears, dead chickens in jars talking and burying a head in the dirt, the originality is there allowiing “Pixu” to defy convention. But like “Saw” which also encloses its participants within a confined space, the action stimulates the art allowing for a claustrophobic journey that is both rich, disturbing and visceral at the same time.

The Umbrella Academy #6: Dallas The continuing perception of this interwoven tale from the lead singer of My Chemical Romance: Gerard Way and artist Gabriel Ba is a collaboration that has always been of interest. Having been a fan of “The Black Parade” because of love of that kind of operatic rock and the sheer visual storytelling, I was actually disappointed that “Parade” itself wasn’t filmed purely like action like “The Wall” or done more “Animatrix” style in anime form. Since Way was an arts major, this would seem a good progression. Having read this one specific number perception, the bigger story is unfocused. Certain images and moments do pinpoint the vice but ironically enough it is after a bulk of the Dallas story is over, that truly intrigues. It is intrinsic upon the meeting in the back of the truck of the Academy after the assassination with the nurse’s revelation of her true motivations. The reveal and drama within that and her illustration just rips off the page. The other moment of thematic truth is 5’s swallowing of the fish which brought to mind certain dark images from Faith No More. The musical iteration of the lyrics at the end have an inherent breathe and rhythm. With the HC coming out later this year, a fully perceived vision of “Umbrella” might shine more light in context. However, as compared to say “Pixu”, which is a much more extreme and visceral outing, “Umbrella Academy” seems almost too safe. But mythology has a way of growing.