With his powerful performance in Netflix’s “Mudbound”, his turn as Eazy E in “Straight Outta Compton” and now with his starring role in Showtime’s “The Chi”, Jason Mitchell is on a role. He took time after the panel for “The Chi” at the TCA Showtime Press Day to talk to Inside Reel about his ambition and process.

You been doing a diversity of projects from “Compton” to “Mudbound” to “The Chi”. Can you talk about keeping it fresh?

Jason Mitchell: Absolutely. I didn’t feel strange about not getting a certain sort of recognition for “Straight Outta Compton”. I didn’t feel like I deserved more than what I’ve got. But I did feel the amount of effort that I put into that character was sort of overlooked. People [were] like, “Oh, you’re from California, right?” No, actually, I’ve never been to California before I shot that movie. “Oh, you’re Easy’s kid, right?” No. They were so convinced that they just totally overlooked it. So in my mind, I was afraid that I was going to be pigeonholed. I was afraid I was going to be typecast in all these different things. So I was like, “You know what? Every role that I get, I’m going to try to change and morph as much as I can to just really show people.

Having just worked on a recent project with Kathryn Bigelow as well as Dee Rees [on “Mudbound”] and Lena [Waithe] here on “The Chi”, can you talk about them as directors and creators?

JM: Correct me if I’m wrong, but I think women are the most sure creatures, you know what I mean. They have very little words, and they won’t go back and forth with you unless they feel that they can win it. And a lot of times, they won’t even go back and forth with you because they already won. Which brings me to say that they just have finesse. Like Dee Rees, I tell people all the time, [one of the] most sure black woman I’ve ever met in my life. We had 29 days, and we still finished early on some of those days. That was incredible to me. Kathryn Bigelow, I call her the big cat because she is super chill. And she’s very locked in. She knows exactly what she wants, and it’s the same thing with Lena. She told me, “Just support me. This is my friend’s TV show. I’m not the showrunner. I won’t be on set every day. But trust me, trust me, and let me know that I can trust you. And we can make a great show.” And I think that’s what’s happening.

With “Mudbound”, Dee had a sure hand but you had the role. I could not see you. And then here, same thing, it’s just because you disappear. Could you talk about that because that’s as much of a physical transformation as it is emotional.

JM: When people come to me with a really heavy material, I always respect the fact that that I was even thought of. For Dee to tell me, “You were the top of my wish list,” I was like…[and then Lena] “If we get Jason Mitchell, we can do the show.” When Showtime approached me, they were really, really like, “If Jason Mitchell’s down, we’re down.” Like, “What is what? What is my life? What are you saying?” You know what I mean? I feel an obligation to come in and I don’t think swing for the fences. Think swing for the parking lot. I’m trying to break a window in the parking lot, And I have to feel like that every time because these people are putting their star in my hands. It’s important for me to try to go out there and kill it every day.

But you can get so quiet, then you get so big. You can modulate the energy really well.

JM: I’m such a people watcher and I pride myself in being able to watch somebody so close, to be able to feel what they’re thinking before they think, you know what I mean? I grew up in service in New Orleans. And working at The Ritz-Carlton, they always just told us, “Anticipate the service. Anticipate the service.” And I feel now, that’s working for me in my career, because I can anticipate how somebody may feel in this situation.

Paul Giamatti is a man of many talents, able to traverse a variety of characters from his compassionate wine companion in “Sideways”, his sublime performance in “The Iceman Cometh” on Broadway and his more visceral performances in films like “Shoot ‘Em Up” and “The Hangover, Part II”. After sitting on a panel with his fellow actors as well as the showrunners discussing their 3rd season of Showtime’s “Billions” at the 2018 Showtime TCA Winter Press Day, Giamatti spoke to The Inside Reel about modulation of energy, likability and the quandary that is. U.S. Attorney Chuck Rhodes.

Can you talk about the modulation of energy within the performance because you have to go to such highs, such lows, and then the quiet moments versus the more intense ones?

PG: Yeah. [Rhodes is] kind of a manic-depressive personality. He’s kind of bipolar. I don’t know. I mean it’s good writing that helps you modulate that. I hope it modulates. I try to modulate it, but I don’t know. That’s just the character.

I mean it is a physical thing that it comes out emotionally?

PG: Sure. You’re just adjusting your energy. You’ve kind of got a map that tells you where you’re supposed to go and you just follow that plan.

Have your feelings about your character changed since you started playing him?

PG: There are actually [things] I like more about him as it’s gone along even as reprehensible as he’s gotten. I liked how clever he was last season, and he continues to be, although he’s very menaced by a lot of things going on. I actually have come to like him a lot more. I just find him more — he’s more fun to play. I mean, in my personal opinion, he’s a psychopath. They all are though on this show. Nobody particularly comes off very well. And this is actually interesting in this season because stuff that happens with the Clancy Brown character elicits some of the residual good stuff that’s still in there about [Rhodes] that reminds him of, “Oh, right. I do love the law and I do love administering justice properly when it needs to be administered.” That begins to come out of him a little bit too. 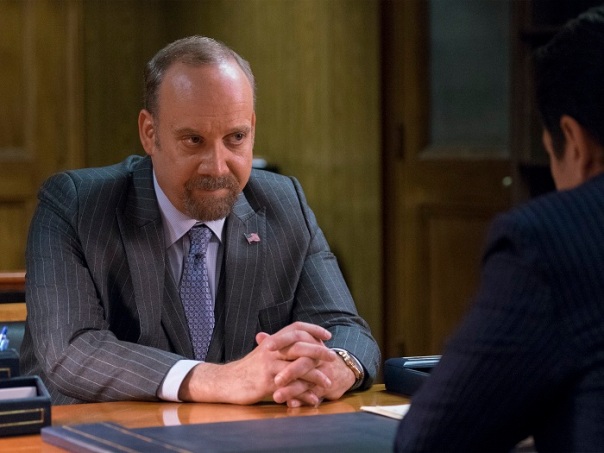 What was the biggest challenge prepping for the big collision scene at the end of Season Two?

PG: We didn’t have a whole lot of time. It is funny that that happens to me when — it’s very hard. Actors will always tell you laughing is very hard to do on camera. I actually am okay at it. The bigger problem I have is that once I start, I can’t stop (laughing). So that actually became the trickier thing in shooting that was getting me to stop laughing eventually so we could shoot anything. But we probably did two or three takes of it.

PG: Yeah. I mean it is. It’s more about subtler things about power and stuff with him than even the money. He doesn’t care about the money, you know? And he is deeply ambitious. He’s hugely ambitious. This governor thing, but that becomes complicated in this season too, about what does he really want to do. And again, it comes to that [idea] where he starts thinking about, “Well, wait a minute. I actually have a pretty good job, and I actually can do good things here.”

Does it have to do with playing the heart of the matter? You have to play him as human, obviously.

PG: Yeah. He has a conscience. He’s got more of a conscience than you normally would think he has. These guys play at — it’s always ping-ponging back and forth. I will get the script and be like, “Wow. This is genuinely horrible. This guy’s horrible again,” and then like the next script I’ll be like, “Oh. Actually, he’s not so bad again.” So I never really know where the hell he is. He has more of a conscience, and his father really has none. There’s a huge conflict between the two of them. 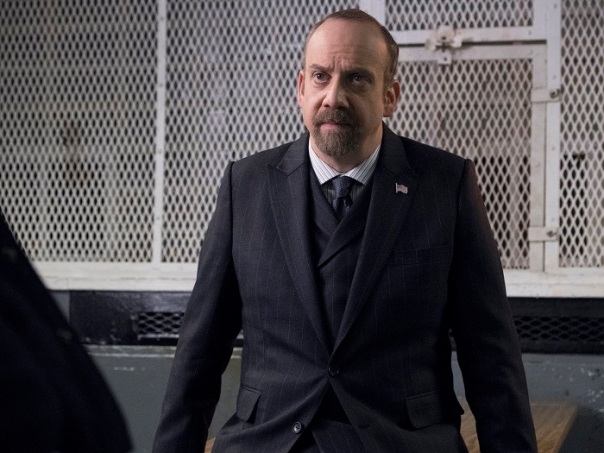 PG: Yeah. That’s true. Well, for sure. All of those things are a part of it. All those kinds of massive themes are [there] — but also dominance, and all that kind of stuff. It’s weirdly being acted out on the world stage.

PG: For sure. The more interesting stuff is stuff about the father. It’s what’s being said and what’s not said, and also the way in which they’re wrestling and the father’s holding him down. All of that gets very shifty and interesting.