Moving into the idea of identity but wanting to be loved on specific existential terms permeates this first batch of films reviewed at the Sundance Film Festival. Whether it is a real life TV personality, a social media climber who has lost touch with a reality or a professor searching to inhabit his real life, the progression is one of self realization or in certain cases self denial.

Mucho Mucho Amor The essence of documentaries is based in the ideas of the subject they are covering. Many times there is a definitive separation in the line between. With this film, it takes into focus Walter Mercado, an astrologer television evangelist who defied notions of gender representation. The film doesn’t try to solve the idea of the man but just the ideas and persona he radiated. His story is one of betrayal, love, myth and loneliness. The man himself retreated from his public persona but the reasons are undeniably heartbreaking but not from a perspective of life. The brilliance and loveliness of the man comes through in his performance. The positivity and just sheer charisma draws obvious comparisons to Freddie Mercury who could never be put in a box. Even when the path leads to a realization, it is undeniably true to the man and his essence.

Scare Me The aspect of horror is reflective in the idea of who is being scared. The idea here is an interesting comedy meta mix within the mileau. It is basically a one location deal where a guy who wants to be a writer ends up in a house with a best selling author who is a little odd herself. It works because it uses no real effects. It is all in the performance of the actors which is no mean feat. It is, in ways, unsuccessful in its attempt but there are moments especially on the lead actress’ side that are borderline brilliant. The progression into jealousy marked with anxiety is an interesting transgression though it is plotted very obviously. The resolution shows the dynamic of the actors though the aspiring writer gets a bit of the short end of the stick despite the irony. It ends with a diatribe into the notion of fleeting success and ambition.

Spree The idea of what dictates fame and fulfillment in an interesting dichotomy in the modern human psyche because it progresses the idea that we only exist if somebody else says we are. The story here follows Kurt who originally though he would become a real influencer. In a way, it is both similar and different from a movie called “King Kelly” that played at SXSW a few years ago. This film is more active about trying to gain fame through deliberate premeditation though this film makes a minute point of it. Spree is a bit of a side title because it is refers to the ride share app but also the journey of Kurt. Kurt is earnest but obviously threw a belt at one point before he progressed into this black hole of primal unspooling. Some of the story is dynamic though at a certain point its pointlessness of existence is an interesting construction mechanism. He moves between just utter self-awareness and a meta humor. At one point it intersects with a character who examines this while using her own fame to deconstruct who he actually is which is when the snap begins. Ultimately it ends before actually explaining a certain extent of his actions. On top of this it is shown specifically within phone perspective reversals and continuing security cams.

Uncle Frank As with many of the films, going in with less conception than just a simple tag line really helps. This film transcends itself at many points. Its story is dynamic but also heartfelt. It might not play everywhere but it really gets down to nitty-gritty divide which is prevalent today even though it takes place in the early 70s. While her performance in the film is not the most brilliant in this film by far, Sophie Lillis is still exception. The actress, who is known as young Beverly from IT  was underused in Part II, but her precociousness and curiosity really has a great resounding quality here since her perception is almost as the narrator. But the story is about Frank. While this is not primarily a social story about sex, politics and identity, it is effective in understanding the true human drama it is. Alan Ball, known of course for “Six Feet Under” and “True Blood” finds his distinctiveness while also staying true to himself. The family that Bettany’s character must interact with is a treasure trove of character actors include Margo Martindale, Judy Greer, Steve Zahn and Lois Smith. The unfolding story brings the range of their prejudices, ignorance or own self esteem issues into play. A death requires they all return and eventually confront a long painful reveal. The texture of finding that balance can border on melodramatic but Ball keeps it just on the teetering point to give it heart and relevance with a point of self pity (though Bettany’s character skirts the edge). But it is because of human and humorous moments both by the innocent perceptions of Lillis as well as his long suffering but elative partner Wally who uplifts the movie in every scene he is in, that the film finds its equilibrium. That is the true heart because it is in this character of Wally even more than Lillis that defines the path through any pain. However the rule of acceptance in a small way done in two small scenes towards the end involving Zahn and Bettany and then Bettany, Martindale and Wally really cement the texture of what the film truly is: a gem.

The sins of the past lay heavily in the next series of films from Sundance, all of which come from makers outside the US yet reflect the inherent isolation within the connectivity of society, and the fact that help can be so close but misunderstood or disconnected. From a young man going through a breakdown of sorts to a homeless solider being taken advantage of to an abandoned daughter finding the roots that eventually unravel her life, the path for these characters is not easy.

Surge The intensity of any film is how it breaks its perception down and how it interplayed to the audience. Sometimes the throttle can be turned way up and it depends on the level of noise the narrative can take. “Uncut Gems” is a good example of this as Adam Sandler’s character continues down a dark path he can’t control. Actor Ben Whishaw with his character goes farther in an inherently extreme way but with lower stakes and much greater damage per se in a way. The film doesn’t implicitly say what his affliction is but the mania that overtakes him to do simple tasks breaks his tendencies down to a set time and, interestingly enough, one street. While the character’s logic might not make sense, either in the reason he does what he does or his inability and lack of want to stop his behavior, the emotionality is distinctly there. However without a point of reference, it becomes slightly unfocused even though the viewer is waiting for him eventually to get caught. The reflection in the camerawork is also unwieldy. It is understood that as his amorality and mentality comes unhinged so should the camera style but it becomes so jagged and shaky that is starts to distract the viewer to the slight point of queasiness which back in the day could be attributed in digital to the lack of stabilizers. Now it is a conscious choice but almost takes you out of the narrative. The relationship with his parents, especially his mother, points to a deeper seated problem but the acting and their interrelation is played too abstractly. When the final solution presents itself, it is a question of why, especially given the character’s job (working the security line at an airport), his issues weren’t brought out in vetting for abetter understanding or help for that matter. The mysterious element of keeping material from the audience is fair but more was needed.

Impertigore Having seen and interviewed writer/director Joko Anwar for his previous film, the notion of family and isolation are inherent themes in his work. His new film playing in the illustrious Sundance Midnight section integrates a woman returning to find a curse laid upon the small local villlage where she grew up and was subsequently exiled from. It is an interesting premise especially set in the jungles of Indonesia. The cool aspect of Anwar is that while certain films set in that area could be more inherently cultural and perhaps tribal, Anwar gives a very mainstream horror spin on them while mixing in local mythology. It continues to serve him well even though the subject matter and the graphic intensity are still slightly outside the mainstream range in the independent world. The curse revolves around the village offspring, which reflects in very specific way. To not spoil the plot, it is terminal but overwhelming pushed by the local medicine man. The dark tendencies of what it reveals takes time to get moving especially with the players involved including a friend who accompanies the young woman on her trip. The stylistic elements, especially the cinematography, give a burnt, cave-like eerieness to the proceedings much like the jungle texture of Colonel Kurtz in “Apocalypse Now” but with more light. Ultimately the resolution gives inherent closure to the characters because the stakes and the reflection of where their morality lies becomes clearer against a bigger protagonist. And like his previous film, it would not be a true Anwar film without a twist of sorts to progress the mythology. 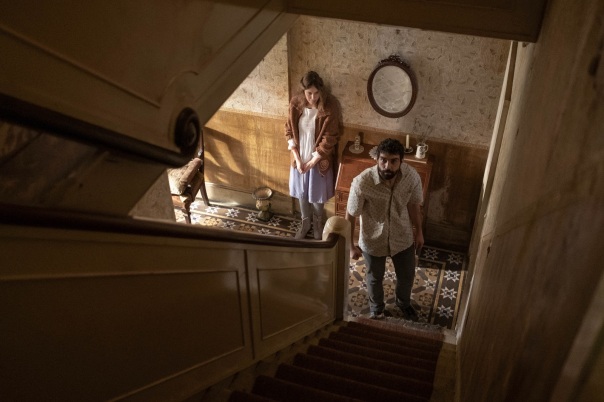 Amulet While in a different mode than “Impertigore,” some of the same themes of betrayal in a form of trust progresses through “Amulet” as well. While the throughline is is mostly clear, there is a parallel story structure showing the backstory of the main character that, although it shows his psychology, compassion and, at times, rage, it doesn’t balance out the ultimate state of his life. The lead character is obviously bathed in the traumatic aftermath of a war but one where he seemed very isolated, likely along the communist block. He is left homeless but seems to have a solid head on his shoulders, just a lack of direction. He is brought to a house by a nun played by Imelda Staunton with her usual masks so one knows that there is a sliver of darkness playing underneath. She matches him up with a young lady who cares for her mother in the attic. The mother has an affliction. But it turns out to be much more than that. The movie progresses down the rabbit hole with distinct aplomb save for the flashbacks which needed to be flushed out a little more. Eventually the film becomes more abstract, not overly but where it alters the perception of what the character might be seeing and what his motivations are. This if course might be in his head but the penance required is an interesting conundrum.