The inevitable progression of the Los Angeles Latino International Film Festival proceeds with an inherent focus (at least within the films experienced) of a South American structure. While distinctly different than its European cousins, the subsect of such a tropical climate brings a more visceral interlude at times in regards to its cinema. Ironically enough, the two films journeyed within this short stint were both made in Colombia (which this writer had the chance to witness firsthand in the auspice of a Bogota wedding less than a few months ago). This experience adds to the understanding of the structure but also to the extremes of filmic license which should indicate to viewers that all is not what it seems on these films. Both films describe tendencies of violence in the country which, while prevalent earlier in the decade, are at little less vehement in the current political climate.

The first film, “Retratos En Un Mar De Mentiras” [“Portraits In A Sea Of Lies”] restructures itself in a post-visualistic style using documentary verite structures that brings one back to the dirt road mentality that so imbued a more Hollywood inferred idea such as “Romancing The Stone” (which also took place in Colombia). Here the political heirarchy, family bloodletting and “an eye for an eye” code take on almost literal meaning with the exploits of a barely functioning teenager Marina (played with exceptional steel and tenderness by Paola Baldion). The story involves the returning from Bogota to claim land on the sea left by her grandfather to her and her cousin (played with brevity by Ramses Ramos) within a coastal town. Marina was beset by a traumatic childhood experience which comes to bear later in the film. The specific rememberance scene alone in the middle of the forest is utterly primal despite the fact of its retreat to a silent end. Baldion’s utter surrender to the character in this instance anchors the film giving it a visceral quality that is missing from many other parts of the journey yet makes sense in the inherent moments of still. The idea that the guards stand on the roads is an utter reality bringing to mind the similar way Gareth Edwards shot “Monsters [LAFF 2010] in Guatemala. The ending begets a darker sensibility that balances but does not overtake similar thought patterns in Serbia cinema yet one that remains surrepticious with hope.

The second film, “La Sangre Y La Llluvia” [“Blood & Rain”], also from Colombia, takes on a more stylish progression but again is a revelry because of its shining female star in the form of Gloria Montoya. The narrative of the picture starts off in the ways of a party girl Angela (Montoya) who wanders through the clubs looking for her next hit of blow. Her anguish is basked in an ever shining light by not letting herself be alone or too much in one place at any given moment. The story of a taxi cab driver she runs into trying to survive a gang war he unwittingly has become involved in unfolds over one night. Instead of staying at the club, Angela helps this lost soul on his way down as bad luck befalls every step of his way until she is completely consumed by its evil. However within this shadow, she finds a connection only to have it broken. While many could see the film’s impetus as gratuitous, the reality, despite the style of the picture shot anamorphically, is its basis in real life in terms of how people function. “Blood & Rain” succeeds in its character based angle of showing how the lives of people intertwine even when they push against not wanting such a responsibility. Fate is fickle in an unbecoming way which makes the full circle connotation of the images such as trees bending with the crashing of rain in darkness all the more metaphorical. 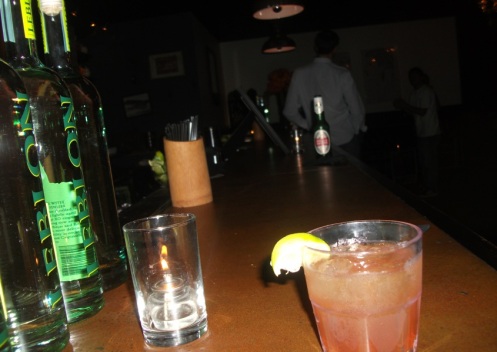 Another film, Sequestro, predicated on a more documentary essence involving a film crew enmeshed with a Police Kidnap Force for four years, follows the hard hitting action needed to save victims in the San Paolo region. A reception following at H. Wood in the Hollywood & Highland complex, where the festival was held, discussed the intensity of such a shoot while the reality of bringing it to view at a confab such as this verified its importance overall. With drinks such as the Prohibition Carnival made with H. Wood’s propreitary teas, elderflower liquor and LeBlon Chacaca, the tropical but hard edged fuel mirrored the film’s ideals as a DJ played scintilating rhythms while fused roses and a glass chandelier mirrored the revelry from overhead.

The Los Angeles Latino International Film Festival, though experienced briefly, impressed with its hard hittiing viewpoints of cinema and entertainment, especially from the country of Colombia which, though dark in its viewpoints, showed exceptional acting abilities in the visceral performances of two leading ladies in the form of Paola Bondion & Gloria Montoya.