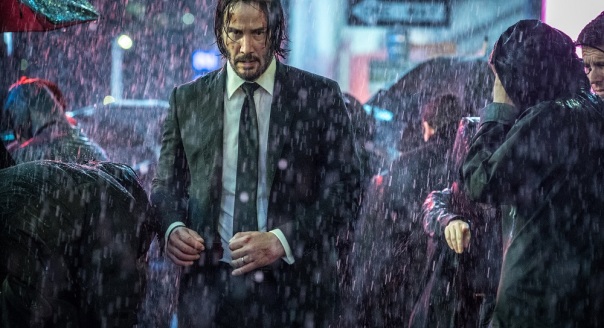 John Wick is a product of his environment yet his choices in terms of his future seem to take on a certain level of vigilante mysticism with a certain lack of logic. The difference between Wick and Neo in many instances is that Wick doesn’t know when he is out of gas…or when to doubt. There is no stopping. The fantastic aspect is that Keanu Reeves is up for anything. This is him through and through in these scenes. While there might be some face replacement, this is mostly all him. Very few people can do this and Keanu is getting older but this demands respect. At one point, even though the film is playing with this idea, his adversaries could have already killed him if they didn’t have as much respect for him as they do. Some of the action scenes including ones with knives and dogs are undeniably thrilling at times. And the film does understand that guns aren’t the “be-all-end-all” is normal circumstance. But at times, one is taken out of the movie because of a certain suspension of disbelief. For instance, there is a gunfight in a horse stable in Manhattan (which is unusual anyway) but when the guns seem to go off there is no response from the horses which causes a break in the world. Hence the viewer can start looking at all of the muzzle flashes being replacements. It takes out some of the visceral nature of the scenes.

It seems more and more with these movies that they are simply just trying to set up the next big set piece to see how far they can push it. But as a result, it feels a little more empty. The first John Wick had itself in play because it was using the Keanu idea and the aspect of the dog with this new world. Interestingly enough, after seeing “Destination Wedding” of all things, there is definitely a growth in the acting department with Keanu. But with this, it all becomes an exercise but weirdly enough it feels like an exceptionally produced TV show at times with the story structure simply allied in place to make it to the next week. Now that said, there is no way some of this action could be done on TV. New York keeps looking more neon coated and wet than ever before so it serves the noir texture. And when Keanu says “I need guns. Lots of guns”, there is no  denying the pop culture impact of the original Matrix as in that one line. But the first “Matrix” knew its rules and never broke them (at least in the first film).

The movie jumps a little bit because of this but the aspect that makes the best impression is Halle Berry as a former foe/ally/manager of Wick. This is the coolest we have seen Berry in a while. It reminds one of her films like “Swordfish”. She is bad ass, she is doing the action and, in a scene in the study, she acts the hell out of it, almost overly so. That dynamic offers a bit more to the progression but like all things it is brief. Angelica Huston adds a bit of intrigue and beauty in a role suited to her that gives poise, grace and a bit of darkness. Mark Dacascos as Zero, a frenemy of sorts is also quite good but the tone of play in his performance is both interesting and yet out of  character. “John Wick: Chapter III – Parabellum” will no doubt thrill audiences and perhaps bait a third one but the elegance of the original is, in a certain way, lost. The problem, like “The Matrix” is that you don’t want the mythic to become rote. But it also doesn’t need to move to melodrama. And that is one thing John Wick will never bow to.