The trepidation in doing a “Toy Story” sequel is why mess up or challenge a good thing. Money is usually the answer in these scenarios. “Toy Story 3” was such a fitting end with its undeniable odes to “Star Wars” lore and just essential drama that magnified and personified the essence of the journey of Woody & Buzz. “Toy Story 4” is a good movie through and through but one that didn’t necessarily need to be. Nonetheless, it works well all the same. This installment works more in all seriousness as an epilogue on existence of Woody. It is not about the kid’s room or the nursery anymore. It is set again the bigger world asking the question”Do I want more?” and “Who am I?” Wonderfully enough this theme tends to innately move the motivations of every single one of the characters here. By not having to give all the focus to each of the nursery toys, there almost seems to be broadening of character.

Annie Potts as Bo Peep definitely ups here game and the essence of a lost toy in the world does take on new meaning while essentially reflecting the mentality of a new age. The way she hangs and runs with Giggle McDimples just feels organic. Woody is struggling to catch up…which is part of the point of the exercise. The addition of Christina Hendricks as Gabby Gabby, a doll with a flaw in an antique store feels misdirected at first but then, especially with the help of her Henchmen (sort of like Howdy Doody on steroids) there is definitely a sense of darkness but in a way misplaced enlightenment. The fact that some of the ending music from “The Shining” plays at one point just was undeniably elating. The different elements of existentialism moving through the story including the Id, hubris and the inner voice are all incredibly deep despite it being able to play very simple on the surface.

Even the introduction of Forky, a toy made out of trash by their kid Bonnie, evolves from that aspect. He just wants to be trash until he realizes his need to be but his first question is “Why am I alive?” On retrospect thinking, it can be quite filtered and intense in what the movie is talking about. That is a question that Gabby comes to terms with. Even Duke Kaboom, a racing toy played by Keanu Reeves, has a similar existential crisis. Rumor was that Keanu pushed the writers to build his character out more. And while that might be true, Duke’s journey has the same path and texture of needing to be as the other main characters. He was thrown out by his kid because he didn’t do what the commercial said he would. The irony and paradox of that statement both as an actor and as a character is, in ways, profound. Not wanting to give away any of the spoilers, this progression serves all the characters even Buzz with his basic thinking.

Towards the end of the film however which was interesting, there was a buzzy moment that very few films get when it hits the right notes finding heart and connection without being schmaltzy…and it wasn’t even with the main character. That said, though there is an almost subtle texture of “Forrest Gump” in the final moments. Not the same perception but it just about got there. “Toy Story 4” didn’t need to be but in that that it is, it is welcome as it is both a crowd pleaser but also an existential epilogue on the nature of a toy that is Woody. And Key & Peele are pretty good in it too.

John Wick is a product of his environment yet his choices in terms of his future seem to take on a certain level of vigilante mysticism with a certain lack of logic. The difference between Wick and Neo in many instances is that Wick doesn’t know when he is out of gas…or when to doubt. There is no stopping. The fantastic aspect is that Keanu Reeves is up for anything. This is him through and through in these scenes. While there might be some face replacement, this is mostly all him. Very few people can do this and Keanu is getting older but this demands respect. At one point, even though the film is playing with this idea, his adversaries could have already killed him if they didn’t have as much respect for him as they do. Some of the action scenes including ones with knives and dogs are undeniably thrilling at times. And the film does understand that guns aren’t the “be-all-end-all” is normal circumstance. But at times, one is taken out of the movie because of a certain suspension of disbelief. For instance, there is a gunfight in a horse stable in Manhattan (which is unusual anyway) but when the guns seem to go off there is no response from the horses which causes a break in the world. Hence the viewer can start looking at all of the muzzle flashes being replacements. It takes out some of the visceral nature of the scenes. 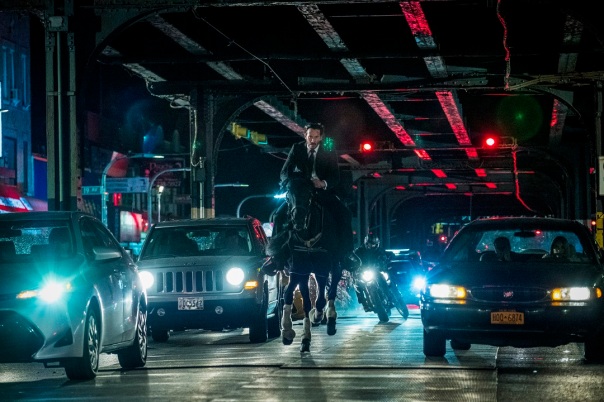 It seems more and more with these movies that they are simply just trying to set up the next big set piece to see how far they can push it. But as a result, it feels a little more empty. The first John Wick had itself in play because it was using the Keanu idea and the aspect of the dog with this new world. Interestingly enough, after seeing “Destination Wedding” of all things, there is definitely a growth in the acting department with Keanu. But with this, it all becomes an exercise but weirdly enough it feels like an exceptionally produced TV show at times with the story structure simply allied in place to make it to the next week. Now that said, there is no way some of this action could be done on TV. New York keeps looking more neon coated and wet than ever before so it serves the noir texture. And when Keanu says “I need guns. Lots of guns”, there is no  denying the pop culture impact of the original Matrix as in that one line. But the first “Matrix” knew its rules and never broke them (at least in the first film).

The movie jumps a little bit because of this but the aspect that makes the best impression is Halle Berry as a former foe/ally/manager of Wick. This is the coolest we have seen Berry in a while. It reminds one of her films like “Swordfish”. She is bad ass, she is doing the action and, in a scene in the study, she acts the hell out of it, almost overly so. That dynamic offers a bit more to the progression but like all things it is brief. Angelica Huston adds a bit of intrigue and beauty in a role suited to her that gives poise, grace and a bit of darkness. Mark Dacascos as Zero, a frenemy of sorts is also quite good but the tone of play in his performance is both interesting and yet out of  character. “John Wick: Chapter III – Parabellum” will no doubt thrill audiences and perhaps bait a third one but the elegance of the original is, in a certain way, lost. The problem, like “The Matrix” is that you don’t want the mythic to become rote. But it also doesn’t need to move to melodrama. And that is one thing John Wick will never bow to.

The texture of “Destination Wedding” works on the element of taking two stars that are in a later apex of their life who starred together previously in an auteur movie but letting their craft with dialogue here burgeon into an almost twilight version of “Before Sunrise”. Even though it ends mostly with a resolution, the aspect of Winona Ryder and Keanu Reeves sparring but with a sense of experience is quite intriguing. Reeves is much more comfortable in his skin and with dialogue than ever before. There is a lyricism to the way he delivers his lineS and Winona Ryder seems comfortable as well and makes one very nostalgic for the years we missed of her acting. She is no longer an ingenue but her sense of life experience is quite palpable. Shot in mostly single shots, the body language plays with such a sense of knowing that despite how black and white the conversations become, there is always a sense of levity. The release of this film in the theaters was low key but its impact is quite inviting much like “Sideways” but without the cultural phenomenon. It is an exercise of two actors who know what they are doing but don’t need to anything more than to let their auras flow. The only trailer on this disc was “Serenity” which is again two actors like McCoughney and Hathaway playing against type for the texture of entertainment.