The texture of the NBC progression within this year’s TCAs swells with the essence of the female focus, both in the texture of comedy and drama but also in the evolution of character. 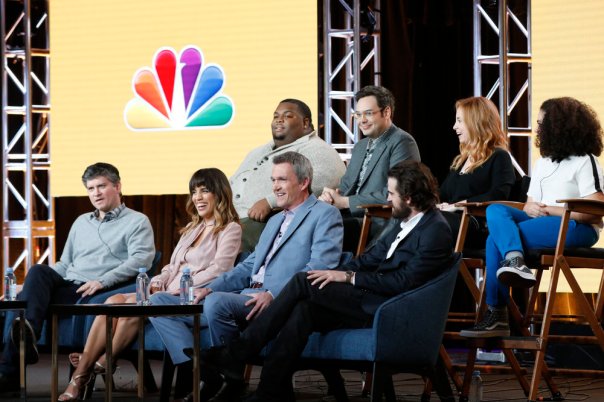 Abbys [NBC] Led by Natalie Morales, this multi-cam comedy takes places in a watering hole created in said lead characters backyard with the inevitable cast of characters. Morales comments that she grew up watching NBC on Thursday nights.While there will inevitably be comparisons to another bar set series from the network, Morales says this structure is almost like “Cheers Theater In The Park” which is enhances by the fact that most of the cast all has sketch and theater experience. Michael Shur, responsible for creating “Parks & Recreation” and also the recent hit “The Good Place” says the biggest selling point of this show (or any for that matter) is “if it might be interesting”. As with most shows in terms of development, he says they “sort of become self fulfilling prophecies”. The draw for him is that it is set in someone’s backyard. He uses a point of reference that a comedic point could be “the regularity of a woman next door just because it is next door and has 7 glasses of wine before she goes to sleep” and also that “the characters sit in the same seats every day”.

Project Runway [Bravo] A stalwart of the cable landscape lineup, this continuation brings the structure back to Bravo and in doing so transforms it for a new generation. The mix of designer Cristian Miliano and host/model Karlie Koss really gives the show a renewed spirit. Miliano is an actual active designer and a winner of the Runway competition so combining this with the fashion show active Koss gives the show an immediacy like never before. Koss admits that she grew up watching this show and for her “it is surreal to be part of this next chapter”. She continues that a lot has changed in the world since the original show specifically in “as far as how designers have to think about businesses today”. For her, it is important that “we all have voices and can give feedback. Fashion is for anyone”. She says, “I first watched [the show] when I was 11 years old in St. Louis Missouri”. For her, “it is a platform and a way to show stories and a creative process, that talent comes from anywhere and everywhere”. For her, “the journey and experiences I have had…each one of us [here] is in the middle of our own multi-hyphenate careers. You have to be social media savvy. You have to know what you want to say. It is not a matter of just breaking out but also sustaining your career.” Cristian gives his perspective of the fashion business saying “I treat every designer as It reat my design team every day. I really feel I get too passionate.” That said, he continues, “It is amazing to see on this show, [people] create something from nothing. I think that is very beautiful to watch.”

Listing Impossible [CNBC] This CNBC show showcasing a texture of selling multi-million dollar homes and the angles needed to close may seem a little antithetical in the current market but it also displays the texture of ambition and goals. Lead agent and star of the show, Aaron Kirman tries to put it into perspective says “The struggles that the wealthy are up against are in many way not dissimilar [from everyone else]. His intern turned agent Neyshia Go, who is also highlighted on the show, keys into this essence of ambition: “The day she got her license her entreprenuerial spirit kicks in. Go explains it in her own way: “You need understand the buyer and seller but you need to know how to deal with the idea of of who the buyer and the seller is. ‘There is a shoe for every dirty foot’ which is what Aaron says.” Morgan Trent, also an agent on the show, has had a different trajectory having played professional football for a short time for the Cincinnati Bengals. He explains his career choice; “I played football. I played in the NFL. But I didn’t love football. I loved real estate.” He describes through the psychology needed in real estate versus say other businesses: “When we walk away, we know that they [the sellers] are on a losing ship. Usually those sellers wait until a year later [and then they come back]”.

Pearson [USA] This spinoff of “Suits” is a paradox of sorts. Gina Torres, a stalwart of the series, left the law based series to pursue other interests inevitably because the plot flow had begun a different way. Adding to that a little later, good friend and co-star Meghan Markle left to marry Prince Harry of England. But it was changing the structure and the focus in moving Pearson’s story to Chicago and setting it in the political arena. Torres explains: “My mind went to Jessica Pearson, this character whom I thought was in the rear view mirror, she wasn’t about walking the line but moving it. You can call [this development] a happy accident. You can call it a natural evolution. [But] now Jessica is in service to her own life and how that works.” Daniel Arkin, one of the exec producers of “Suits” and now the showrunner of “Pearson”. He speaks on the texture of the show: “When we set out [to do this show], we want to do it different than how we did ‘Suits’. Jessica Pearson is the link but we wanted this show conceptually to be more gritty and raw. Jessica was a chess player in ‘Suits’ but once you become the lead character, the story is not going to go very far if [that character] knows everything. People reject her for a change. Torres concludes the perception: “These are completely different people from ‘Suits’. Jessica doesn’t know who she can trust”.

La Reina Del Sur [Telemundo] This hybrid of a telenovela has become a more straight high production series from Telemundo. While the US has made their version with “Queen Of The South” on USA, Kate Del Castillo was the original bad-ass. She explains: “We never thought it would be the success it would have been. It was shown as a telenovela. But I was exhausted. We had different conditions budget wise and we did our best.”. But in terms of returning to that mindset, she continues: “You forget the character. You forget what is going on. It has been fresh because they have been repeating the series.” Living in Los Angeles, she continually watches for shifts in the entertainment industry: “Things are changing slowly but they are. Every time I read a script there is a better role for Latinos and women Latinos. I have been living in Los Angeles in 18 years. When I first came here I already had a job in ‘American Family’ for PBS.” As to the possibilities in this new incarnation, she teases: “You can expect a lot of action. I am 8 years older and it hurts. But she is more mature. She is a mother. She is mature in that way but she goes for it.”

Busy Tonight [E!] Closing out the day before rushing back to do a new show that evening with Josh Groban, Busy Phillips is full of energy and confidance. She starts off: “I have been an entertainer for 20 years but making my life very open on social media opened me up to a whole new type of audience. It felt like a natural progression for me.” In terms of building the show: “What we wanted it to be was a little treat for our viewers at the end of the night. I was sick of watching ‘Friends re-runs’ on the end of the night.” As far as her guests: “People surprise you. David Alan Grier was incredible. Patti LaBelle is one of my favorites. Julia Roberts was always a priority.” Tina Fey, producer extraordinaire, explained her openness to the idea of the show on E: “I really liked Busy. She floated this idea. I think what [this show] is is unique and smart. (she looks at Busy) You are not trying to be Jimmy [Fallon] or Ellen.”