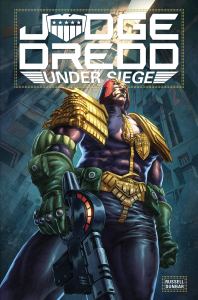 The aspect of authority is always contained within the locations in which it is adjourned. In some places, survival has to transcend the law: to allow it to take on a different meaning and, by extension, grow from it. In “Judge Dredd: Under Siege” [Mark Russell/IDW/96pgs], a story on the blight in the waste dumping part of Mega CIty One, within a place called the Patrick Swayze Block, the essence of basic human decency has broken down most because of the texture of economic decay. No one can afford the basics of a normal life and the law does not have a say. The story, in many ways, plays more like an homage to “Total Recall” because it involves mutants, both bad and good, wanting to be accepted as normal citizens. Dredd enters into the block to find a missing judge who was there doing community education. He finds a blonde haired, power hungry mutant there instead who wants to detonate a bomb in the main pedestrian mall of Mega City One, not to kill people but to infect it with radioactivity so eventually those residents will become mutants and they will all be together as one. Dredd is still bathed in the idea of black and white because that is all he has known. It is up to the Rebels fighting around him to hold him to an ideal and not the other way around, which speaks to the Under Siege ideal which more speaks to the idea that the Judges won’t be around forever.

These batch of comics revel in the perceived ideal of loyalty and what that means both in terms of the larger journey but also in context of one day how they will see their history and possibly different choices they could have made.

Bubba Ho Tep: Cosmic Bloodsuckers #4 Like “Evil Dead” with Ash, whenever one looks at Bubba Ho Tep, Bruce Campbell’s face comes to mind. However in this iteration, the mug of Elvis and his merry band definitely give the proceedings the kind of wit and suspension of belief that can happen in comics or an animated series. The continuing homages here including to “The Walking Dead” & “Black Dynamite” key in further to the sense of tone and dread. Much like “The Dirty Dozen” or “Inglorious Bastards”, each member of the team is undeniable but the texture of humor and lighting really shines through. The team of the Blind Man & Woman really stand out in this issue between mowing down a demon with a semi and a bit of witty banter between the woman and a young kid who wonders how she “sees”.

Dick Tracy: Dead Or Alive #2 The texture of an old school hero like Dick Tracy always runs the risks of being dated especially in the grey world that most heroes live in nowadays. However the reflection that plays in this iteration is that corruption seeps into the center of everything. Tracy is only a stone’s throw away from being shut down. In this iteration, Big Boy has been executed in the electric chair but his money has gone missing. A new big boss must seize the throne but like evolving criminals, and unlike Big Boy, it is not about bombast but strategy. Brute force doesn’t work and Dick Tracy has to adjust. Ultimately it is he who must adjust to understand how he is manipulated but also how to appeal to the better nature of man in the police force when he sees everyone around him on the take.

Judge Dredd – Toxic #2 In the continuation of the storyline regarding Offies (workers that work below the surface of Mid City cleaning up and purging toxic gases that could threaten all above), this issue does little more than exacerbate the situation without much headway. The Symbiotes, aliens that feed and sustain the workers at the depths, are being killed off while some have achieved the essence of asylum. Dredd, ever the basis on a black and white world dispensing justice, makes the situation worse but knows how to manipulate information to his advantage. As the issue ends, the aspect of conflict that is brewing is much more tense and effective but rings too close to part of the storyline of the most recent “Dredd” reboot film.

Night Moves #1 Black Crown continues its possibilities of pulp sociology and horror with its series. While “The Lodger” and “Euthanauts” take a little more getting used to in terms of tone, this idea is much more palpable even if it gets undeniably gory. Like stories in films like “Bangkok Dangerous” or “Bad Lieutenant: Port Of Call – New Orleans”, the lead character has enough charisma to sustain a story even though one knows that the resolution can only end badly. This series is based on an older version of the character telling a story he really doesn’t think through. The themes are both resonant and thought through and the art is dark, liquid and at times lurid with a sense of the symbolic.

The essence of these following comics reflect in their search for truth despite manipulation, ignorance and simple feelings of superiority within the character constructs.

Judge Dredd – Toxic #1 Dredd as a character has always been an enigma. He stands for justice yet is also an executioner as well. This makes the gray in his judgment a little more problematic in terms of reasoning and motivation. This story progression here focuses on “scrubbers” who deal with waste in the levels beneath the city. What transpires is an essence of sentience with a symbiote which allows the workers to live less painful, mutated lives. The balance and what Dredd represents can be at odds with a sense of right but that is the gist of the character with his rock chin which is as immovable as ever despite his assurance that he can feel compassion

Star Trek: The Next Generation – Terra Incognita #4 This interplay keys in in the very way that made “Star Trek: The Animated Series” such a delight. It is too bad an animated series was not made with this crew. This issue shows Commander Riker trying to teach Ensign Wesley Crusher the importance between simulation and actual real world experience. The interaction reflects another TOS: The Animated Series story from “The Infinite Vulcan” which explained that nothing is at it seems and actions are determined by class and leadership. There are different levels of existence within this current away mission but another intelligence lies just below the surface which forces Wesley to make a decision despite the problems it may incur. The best Star Trek stories do this without hitting the reader (or viewer) over the head with what they need to think.

The Lodger #1 Reflecting like the recent “Curtain Call” graphic novel, this story of a drifter girl meandering from city to city with seemingly murderous intent never quite balances its intelligence with sense of motivation but still relates a sense of tone. The essence of the black and white art brings across textures of say “National Born Killers” but relies too much on profanity and seemingly esoteric dialogue to really make a true impact making the angst seem more like simple propellant than actual motivation.