Unconscious Persuasion & Notions Of Behavior: An Interview With John Noble of “Fringe” 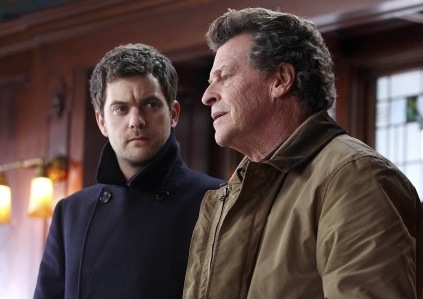 Discussing the finer points of hubris and the collective unconscious with John Noble who plays Walter Bishop in the highly effective and popular series “Fringe” on FOX would be interesting even in the quietest of circumstances. But huddled against a pillar inside Pacific Park on the Santa Monica Pier during Fox’s All-Star Summer Television Critics Party is something else entirely with bells and whistles flinging off in every direction. Ironically, this is something that would quite literally make Dr. Bishop nuts. However, coolness prevailed with the ever focused  Noble discussing the notion of morality within the confines of the mind, the collective unconscious and the simple emotional connection between a father and son.

Could you talk about the evolution of Walter’s morality versus his emotionality?

The moral issue is being examined constantly in “Fringe” through Walter as much as you can. [It is about] what happens in simple terms when you play God. Taken into a more mundane, how does [one] crack and depending how much [pressure] is given, how much does [one] crack. Those issues we have certainly dealt with. We don’t lay them on [too heavily] because not everyone cares. We will however continue to look at that morality because it is important in the world we live in to look at bigger issues.

How heavily does academia play into the creation of this character or does that angle become secondary to the emotional angle?

I’d like to think that the work we do leaves a legacy for everyone. If people are people are interested in  [the academia] and we make  reference to it, [they can] say “These are intelligent people….they thought about that!” [In this way] it can go beyond being entertainment. I certainly think about those issues and, on occasion, we question our work if it is slipping away from that. All the people involved [in this series] are sensible enough to know that. I use the word “legacy” because it’s nice to think that perhaps college kids watching this show are saying “It’s nice to think they [the characters] are talking about stuff we do in Psyche 3”.

But also, in terms of “legacy”, applied in a more literal term, people might be able to look at “Fringe” in 20 years and say “They were ahead of their time”.

(laughs knowingly) Isn’t that the way science fiction is…if that is what we are. [At times] I don’t know what we are. I guess so, if it has that longevity, people will look back [at our show] and look as a curiousity to some extent. And they’ll [probably] laugh at some of the things we think. [However] what we try to do with our science, and with the morality [of the characters], because we do talk about that, is make everything that needs to be done within the possible [and] the plausible. Human characteristics, for me, [require] that I need to find a reference point somewhere…God knows there’s plenty of them…for all mass behaviors, genius or not. All these things I reference deliberately.

When we talk about plausibility in terms of human behavior, can you discuss Peter’s forgiveness of Walter in last season’s finale?

We are examining what happens when trust is broken. How does that compare? With a breach in anything, it can be repaired [and] it can be made stronger…but it will never be the same. Josh Jackson and I talk about this all the time [in terms of] “How are we going to go ahead?” I was [even] talking to him about this today because we want to get it right.

How much then does the notion of the unconscious and the sub-conscious assimilate themselves into who these people are?

I don’t think you can play multiple characters without dealing with that.

Are you making reference to the alternate universe in “Fringe”?

I am talking simply about modern characters. I am talking about anything. We’re all multiple characters…you and I. We all have many personas. What we see in Walter Bishop is a man who is more overt in all of these things but also [in the fact that] Walter-nate is what he could have become with a turn of the screw 20 years ago. This is fascinating stuff in intellectual terms. I certainly think that.

How many levels [of consciousness] do you think are possible within Walter?

With a character you might or might not have to take them all the way but you have to keep digging. It is what I like to do as an actor anyway. If you are doing Shakespeare, that is what you do…you grapple…you’re dig deep. For me it is not “a day at the office” but something I like doing.

What has Walter allowed you in playing his persona to learn about your own observation of human behavior?

This is interesting. [For me] the best thing about playing Walter as he has developed is that his appeal has crossed the complete spectrum of our audience…from the kids who think he is a wonderful old grandad to people in their 60s or 70s who say “I understand him”. That is me. That is my concern.