The aspect of hubris flitters in the idea of redemption. But when there is no cure to a sickness that befalls a civilization that is when anarchy sets in. “Renaissance Vol. 1: The Uprooted” [Frederic Blanchard & Fred Duval/Europe/59pgs] approaches the perception from two angles: one of the belittled and one of the rescuers. However perception in a greater vision can be seen between invader and conqueror even if the plan itself is benevolent in nature. Any degree of darkness can be seen as stifling. In this story, humankind has unleashed a plague that it cannot contain. On another planet we see the elements of a species which acts in some ways as a emergency rescue organization in the cosmos. The parallel stories are an interesting diatribe on the notion of immigration within the ideals of humanitarian aide. The aspect of pride balances in the what the quid pro quo might be in the requisite continuation of the relationship. This reflects in the reaction of humans but also the use of relaxants almost as a calming force. The reasoning of why this is happening to the human race is not fully explored while the domestic tranquility of the aliens and their rites of passage are. The result is there is lack of parallel experience to show why one side should trust the other. Ultimately it comes down to the fact of a quest with a person who carries the cure becoming the catalyst for a series of other events, This of course is a relevant but tried plot device which ultimately levels the playing field. Yet the overwhelming technological possibilities of the aliens will not be enough to sway a necessary feeling of superiority that what is being done is for their own good. 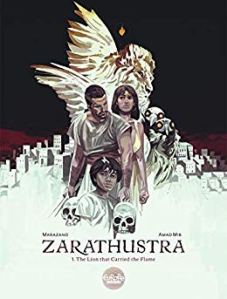 The idea of mythology leading back before there was a nature of history (written that is) is an interesting conundrum. The balance of what society necessitates as the norm has shifted over the millennia depending on the structure of belief. “Zarathrustra Book One – The Lion That Carried The Flame” [Richard Marazano/Europe/60pgs] rests in an ideal of a matriarchal dominated society that fueled the idea of business and a monotheistic structure. The story takes place in the area that now occupies Iran. The texture of the gender perspective contained in the story is also a pertinent one. The beginning of this take of a monotheistic transformation speaks to a man looking to escape his past and living a balanced future. His past though follows him as a scourge led by a supposed manevolent God. When the army following this icon ransacks his desert town, it kills everyone. Our soldier saves only himself and the lead female ruler in the city that looks upon him as fodder. They escape into the desert. But the Army continues to search for one who has been marked. While there are textures of Aslan in the representation of the entities, the archetypes are true to form and the art reflects this without overindulging in its tendencies yet giving a sense of space and reflection. The story structure is told as a parable as the older soldier is now telling his story to his son. While this is only the first book, it’s point of view is sound but also resolute and focused giving the story a sense of will. 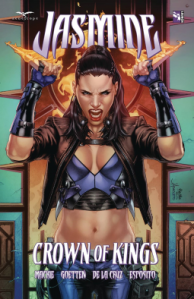 The aspect of anti-heroes struggling against their powers is nothing new but the aspect of approaches to redemption can always different according to states of being. Like the upcoming “Dark Phoenix”, Jasmine in “Jasmine: Crown Of Kings” [Howard Mackie/Xenoscope/146pgs] doesn’t seem to have a full conception of her powers. However she is wracked by a sense of memory loss. She sees past pieces of her life as an immortal “jinn”, a form of genie who casts death and destruction in ancient times at the bidding of their masters. They were former slaves who now are free of those chains and want to find power on their own. The journey from slave to jinn is actually the more interesting story. The story in this volume of events is all about struggle for power but not necessarily the reason to shy away from it. The story does play on the popularity of “Game Of Thrones” while mixing in the coming of “Aladdin”. The issue is that the actual progression of the story is not deep enough with stakes to connect to make it feel meaningful. The dialogue is alright but sometimes overwrought with too much attention placed on story details in the words and not as much in simple imagery which in this form tends to work better. Also the establishment on Arcane Acre is not formed enough to give a true perception of its purpose (like say with “X-Men”). The cornerstone of the story is a battle between two would be sisters who were brought together out of threat instead of by need. The disconnection is ultimately what undoes the story because even with her betrayer Ali. Jasmine’s truth just doesn’t seem as inspired as it could be.