Posted in VIDEO: The Inside Reel In the Trenches 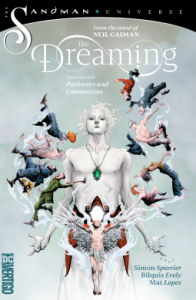 The aspect of a dream world and how the different perceptions of real play into ideas of conscience but also consciousness is something that Neil Gaiman has been dealing with for many years. The ideal within “The Dreaming Vol. 1 – Pathways & Emanations” [Si Spurrier & Neil Gaiman/Vertigo/200pgs] involves the breakdown of that structure. Whole different characters take the narrator form at certain points based on the idea that different metaphors and points of view come to bear during the story. The angle is a good one placed within the fact of an almost meta approach where Nora is foul mouthed and fun and just wants to be left alone but she can turn into a raging monster when she wants to. The key within her story is signifying what is real and what is not. Her approach is simply one of survival and yet Dream which seems to be a form of Lucifer in a way wants to help her find her true potential. However, he then summarily leaves the game. The different creatures that come to bear as well as myths like Cain & Abel have a quality of dementia to them in an almost wonderful way in that instinct becomes the prevailing nature overall. Nora however propels the aspect of what the story is about which about control over dreams. She integrates the personages of the blanks whom a character called Pumpkinhead refers to as The Soggies. They are made of dream matter and supposedly just mimic other dream thoughts but what comes about is that they can be lead and have a will at times of their own. That underlying metaphor propels the story in many ways without feeling overbearing. Ultimately the reflective nature specifically in how it relates to the librarian and the almost fated path of Nora offers a fitting end but also cliffhanger to what the continued vision of this dreamworld might be. 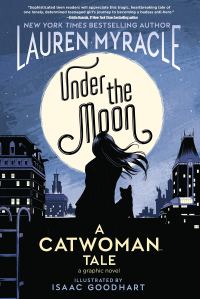 The essence of Selina Kyle in a new perspective has always been an interesting idea. In a DC Universe where all the heroes comes from some trajectory of tragedy, one more is not necessarily a big surprise. In “Under The Moon – A Catwoman Tale” [Lauren Myracle/DC/208pgs], we get an origin story of sorts. Selina had possibility in terms of a moderately passable childhood but had a mother that either neglected or didn’t understand his own self worth. The reality of the situation is a truism as the actual idea of how this works runs in parallel to Regina Louise whom IR talked to in an interview recently. The situation creates a texture but also the experience of the individual. The story line that involves CInders, which was Selina’s cat she rescues and then loses because of the cruelty of her mother’s boyfriend, scars her for life but causes her not to trust anyone. She runs away from home and lives on the street. Her training with Ono seems organic in terms of how she gains skills. She was already stealing from stores before that so the element of this kind of life is ingrained into her personality anyway. The psychological elements of trust are brought to bear especially with Bruce Wayne whom we see a bigger backstory in terms of their youth. Selina has the modes of communication but she also wants people to make the effort to connect which sometimes is not the nature of human behavior. Because of this stubbornness, she continues to live on the streets and finds her way even if those she really wants to be close keep her at arms length or vice versa. “Under The Moon” is a Catwoman origin story for the new age which unfortunately keys into the isolation of the intention of the character while still keeping it in a time void with its own voice.