A guy’s getaway is based within the structure of what men will do when the women are away. The key is that the kernel of intention is always in the back of the mind. The reality, of course, is to be oneself because that ultimately sells the idea in any situation. Granted going for the gold creates balance. But it is all about a sense of play. And that second dipper of blue cheese.

Daytona Beach has always had the beachfront lock on that aspect. For years, it was the poster child of Spring Break before the angle changed. But the young is always about what is new and hot. The power ultimately lies in the stamina.

Speed, power and this ideal of longevity truly cover the physical perception of what starts the engines…literally.

Located just minutes from the Daytona International Airport which from most gateways is only a short stop through Atlanta on Delta, the Daytona International Speedway, the mecca of all things racing, looms in shining glory. It makes other tracks like Charlotte and Chicagoland seem like infants, simply for its majesty. The Daytona 500, world famous for proper reason, is open year round for various elements of taste but on a normal day one can venture simply through to view history. A tram tour through the actual track and backfield show the intensive engineering required to make the park run. Inside the Daytona 500 Experience, the chronology shows the beginnings on the beachfront more than 70 years ago. Not simply walking exhibits, the activities are interactive including quick drop training as a pit crew changing tires on an actual stock car followed by a virtual race simulation inside stock car shells.

For a angle of the real, Speed Park Daytona, less than a mile away, offers a little more torque for the buck. Hidden behind its go-cart exterior lies Drag Alley where full size dragsters that go from 0 to 75 in less than 2 seconds lie revving under deep thunder as the waiting partipants sign the waiver and strap in. As the go line on the second light drops, the intensity is to floor it and hit the accelerator at full speed once the dial hits 4800 RPM. The blast off is a rush and anyone over 52 inches height regardless of age need apply.

Destination Daytona, in compelling perspective, a stone’s throw away near Interstate 95, offers the more practical side of the hog revolution. Mandy Rossmeyer Campbell, daughter of founder Bruce Rossmeyer, runs one of the largest Harley Davidson dealerships in the world. The sound upstairs in the garage room as these beautiful bikes, customized to the nines, are tuned raps pure thunder as bearded tatooed customers wait in patience while their rocked-out children are amped. 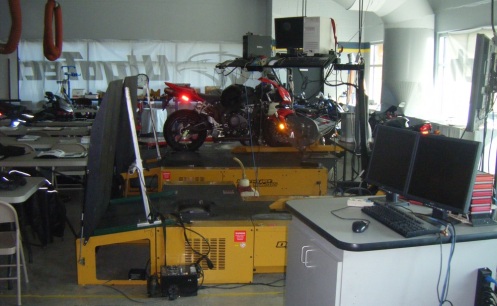 Wyotech Institute, a separate entity on the back of the property, is a national recognized school for the maintenance of these high end bikes as well as an exceptional array of marine proponents. If you know the basics followed by a craftman’s eye, life may become something between West Coast Choppers, opening your own garage, working on luxury boats or serving on a tanker fixing the big boys on a ride around the world. All are possibilities as well as the stability of an exceptional vocation with a school that has an almost eighty percent job placement rate, which is stellar, especially in this economy.

Speaking of marine, the full day excursions down at The Critter Fleet departing off Ponce Inlet warrants the motivation of the adventurous journeying more than 40 miles offshore to the cusp of the Bahamas. At this distance, five pound weights drop sardines to the ocean floor where an array of good size fish await the fight from red snapper to cobia to the occasional bonita. Armed with a cooler of ice and a case of suds, the day is not without run and workout both from the thirst inherent but also the incessant reel action needed to bring said bait up from the ocean bottom, fish or not. The end of day is fulfilling yet the soreness in the time after proves that work has been done. 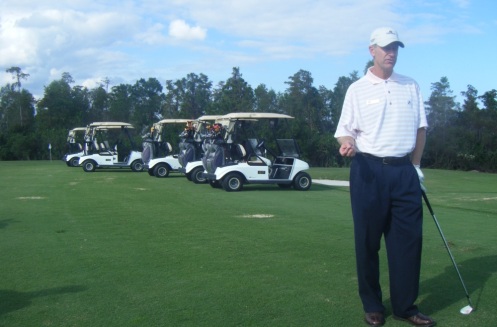 For the less ocean inclined, a golf clinic over at LPGA International can improve the golf game immensely. Even for the experienced player, a refresher is always necessary to remember certain inherent truths especially in the poise of effective stance and follow through. The golf professionals are both patient and undeniably practical in their application.

The history culimates at Jackie Robinson Ballpark, which is on the national historic registry as the first place, albeit in a minor league game, where the famous athlete played his first non-segregated game. The venue is maintained just as it was all those years ago before the advent of digital. Throwing the ball over the plate as the Budweiser Bullpen looms in the backfield gives a sense of distance as the nights bring minor league action Chicago Cubs-style as they are the ball club who currently use the arena to bring players up to the big time.

Food and drink of course are of natural necessity both in vision and texture to the area. Certain permeatations offer desired results depending what is needed from breakfast through the day.

The Dancing Avocado Kitchen gives penitence in its massive breakfast burrito which goes two for one on certain days which can floor the desired engager. Led in tandem by a blended chai smoothie, the spinach, potato and onion filled concoction heightened by the owners own special chili sauce can start the day right on multiple levels.

The Daytona Diner, by comparison, is a biker stop right behind the riverfront Harley dealer which is also overseen by the Rossmeyers. The Betty Boop biker girl on a motorcycle in plain view is worth the trip alone. On the forefront, a skillet of scrambled eggs and potatoes topped with sausage gravy reveled by a glass of milk and cheese grits highlight that this is not a town for the faint of heart.

Lunch epitomizes a different inception as Houligans right near Destination Daytona offers chicken wings “Wally Style” both garlic entrenched and grilled which is hot and satisfying without being too messy. The cheese macaroni poppers needs to be tried simply for the perspective of their ubiquity along with the explosive enriched chili cheese fries and a draft Guinness or three. 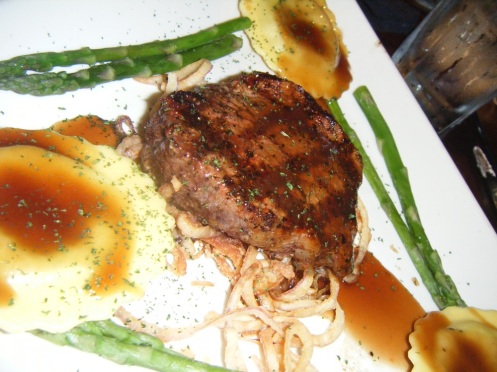 Stonewood Grill simply offers the goods straight off without a thought straight to your stomach within a structured environment condusive to a business meeting or the requisite mid-week food coma. The Blue Cheese Chips simply are guilt inducing in the best way simply because of their indulgence while the main course of a filet mignon wrapped in a holy trinity of ravioli ensconced with portobello mushrooms and asparagus give the satisfaction necessary to either continue the night full force or pass out depending on your intentions.

By comparison, dinner at Martini’s Chophouse is a experience in the subtle and visually stimulating. Setting up with a pre-dinner cocktail which on a Thursday means $1 martinis around a refined fire pit makes the feeling good. The avocado shot in the men’s bathroom simply has to be seen to be explained. 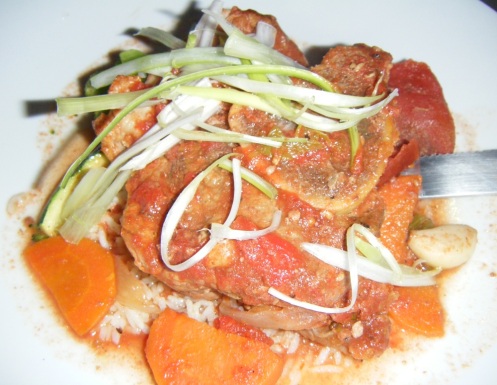 Entering inside with the low light and excellent smiling service of the interior dining room, the meal commences with a sumptious tuna cocktail whose visual flair is matched by the light wasabi sauce that washes over the seared ahi. The main course of veal osso bucco offered tenderness without an overwhelming sauce which made its execution just right. The after dinner penance of a double expresso continued the journey as the french crepes with the lingering vivaciousness of peaches, recommended by the Santa Barbara-bred waitress, gave a light and delicious end to the proceedings.

The late evening possibilities have something for everyone while still staying within acceptable bounds depending which way tickles the fancy. 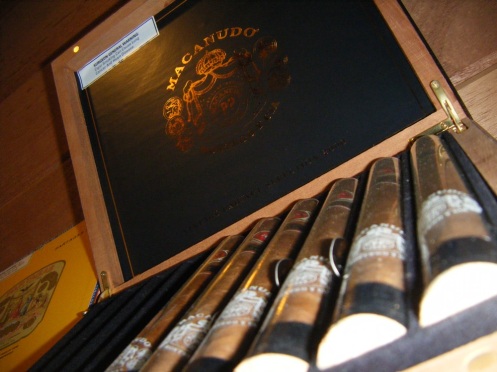 For the chill, the layout has the goods at Fletchers Cigar Bar which has an impressive array of different possibilities from full bodied intensity to simple smoothness. The briskness of a Macanudo, balanced by the vision of a well poured Guinness, sanctifies the experience along with a variety of other cocktails while the unique air filtration system allows for the ladies to enjoy the requisite ambiance without having to cough their way through the haze.

For the bar inclined, the need look no further than Main Street where a bulk of the world famous Bike Week occurs. The pinnacle of its essence rests on the steps of Froggy’s Saloon, less than two blocks off the beach, where the doors only close four hours a day between 3 and 7am.

The creation of a new cocktail marked the entrance into this reverent hall. The Irish Car Bomb, mixing a half pint of Guinness with a drop shot of Baileys and Jameson, was altered into the “Los Problemos”, inspired by the lunch excursion to Houligans (lovingly nicknamed “Los Hooligans”), in which Cuervo Silver Tequila and Kahlua replaces the ingredients of the requisite shot sinker. The concoction is smooth, tasty and more than a little dangerous as observed by a bad ass female bartender who gave no slack but could also belt out Crowes and AC/DC without missing a beat.

Boot Hill Saloon, just a stumble further down, rocked in its belief that closing time allowed for one more shot. As the 2am hour approached (which necessitates the cut off time), a Pabst draft consumed was only more apparent in the arrival of a brand new Red Stag dispenser which necessitated applause and a quick pour.

The last stop on the range revolved in Dirty Harry’s Bar, marked by shadowed cool as stained glass hues reflected in the guise of a Jager shot. As the lights came down, the lure of an after hours club allowed for the continuation. “Last Call” and “Poppy’s” swirled in the brain yet the lure of crashing Atlantic lulled the goal.

Daytona also permeates from the correct selection of domicile. With many people coming for the races as well as biker events, the key is to be able to be fluid to the situation.

The Cove On Ormond Beach, just down A1A, offers this flexibility in terms of its efficiencies set up with an exceptional balcony. The encompassing Wi-Fi coverage, password protected, as well as the inclusion of an HDTV with DVD Player allows for the balance of work which is undeniably needed.

The pool area offers something for both sensibilities. The Lazy River allows for simple hangtime while an old school enclosed water slide offers the ability to relive youth in a very specific way. The hot tub jets fire with ferocity as the simmering waves of the Atlantic offer that unfettered sea breeze which can be experienced late night with a cold infusion dip and a requisite Cheyenne Wild as the foam of the ocean races past your feet.

Daytona Beach gives the “man on the go” the ability to chill or rock out, burn the candle bright or simply hit the gas while still maintaining the order of the day: relaxation.