Choi Min-Sik is a pillar of South Korean cinema. When the renaissance began of the Korean Film Industry where it upped its game in spectacular fashion in the early 2000s, Choi was there. From the first echoes of his Cannes lauded film with director Park Chan Wook in “Old Boy”, he has only increased his stature including a variety of characters. The summer of 2014 sees him diversifying in spectacular form in the recently released “Lucy” from Luc Besson starring Scarlett Johannsen and dominating the Korean box office with the war epic “The Admiral” which follows the life of  naval leader Yi Sun-shin in one of the biggest naval offensives in Korean history. Choi spoke to Inside Reel about psychology, physical manifestation and finding your voice with such as character.

Can you talk about the psychology of leadership when heading into a seemingly no win scenario as The Admiral is faced with?

Admiral Yi is not an angel who fell from the sky saying he will save the Joseon dynasty. He went through numerous challenges and overcame them. He is no different than you and I. He did all he could as a soldier to protect the nation. Like a soldier’s manual, it is apparent for soldiers to have no fear and risk their lives in battle. But in reality, there are not a lot of people who can overcome their fear. For these reasons, there are only a selected number of praised leaders. Even the best soldiers can have a hard time listening to orders, but Admiral Yi sticks to the manual until the end. Do you think he didn’t have a difficult time? If he didn’t then he would not be human. In his war diary, Admiral Yi mentioned all the hardships and difficulties he faced as well as re-checking his heart to discipline himself. Without that, he would not have been able to stay strong throughout the battle. This is the reason why he is such a significant character. This is just my personal thought but for me, Admiral Yi is not a superhero from the start but through training and practice, he has become of the most respected figures in history.

With the Admiral, there is a sense of inner strength that propels his fortitude. What did you have to understand about the man to play him from the inside out?

In my 20 years of acting, this was my first role playing a hero. There are not many historical records on Admiral Yi so I did not know where to start. I had to read his war diary over and over to understand where he was coming from. It is not like he was born with superman DNA to help him win the war. He is human and the fact that he overcame all his struggles to push forward made him that much greater. He probably felt everything a normal person would feel in this situation. The worry he had for his mother during the war…the pain he felt when executing the runaways…and the daily training he went through to discipline himself by writing in his war diary. While studying all this, I discovered a human side of Yi Sun-shin, not an admiral, and this is how I got to understand him and act out this particular scene.

Physicality always takes a role in how far you are willing to push yourself whether it is battling in a sword fight here, gun wielding in “Lucy” or even eating an octopus in “Old Boy”? Can you talk about the different emotional and physical connotations you have to manifest through each of these characters?

For “The Admiral: Roaring Currents”, I had fainted while shooting one of the battle scenes. It was a scene where I was ordering people to take cover but when I opened my eyes, I was looking up to the sky. The costume itself was very heavy and the weather was really hot that day so I just fainted while saying my lines. For “Old Boy”, however, I was younger so there were no big hardships. I remember re-taking a fight scene more than 10 times. I was out of breath by then so when you watch that scene, that part was not acting. This is what the director intended, however, to show that character’s loneliness and hardship fighting alone. In “The Admiral: Roaring Currents” I wanted to reserve my expressions and motions as much as I could. Admiral Yi probably had a lot of feelings inside of him but, as a soldier and a leader, he could not express his feelings. It must have been a lot of stress on him and he probably felt guilty and angry but he held it in. That is exactly how I wanted to portray the role of Admiral Yi so I focused a lot on my face expressions, especially the eyes. I wanted to bring out the detail where my eyes will show all the inner feelings without using big movements.

Can you speak on your perception on portraying the intimacy of brutality in the characters you sometimes play? And how that affects a character’s psychological make up whether it be in this film, “Lucy”, “Old Boy” or even “New World”?

I have no biased feelings toward playing brutal characters. But that is one of the characteristics that needs to be played so whether it is viewed positively or negatively doesn’t really matter to me. I don’t feel it is the right mentality for actors playing antagonist characters to be concerned about their image so much.

Since we go out to young students, can you talk about your training coming up in the business. You have played a variety of different characters that you create different masks for. What does it take for you to slip into these roles.

To have come this far as an actor, one of the biggest factors that kept me going is really loving and enjoying what I do. There are a lot of hardships along the way, but as much as the audience comes to watch what I do and invest their time and money for me, I need to repay that back to them by working harder. That is a real professional. In order to gain that responsibility, you need an endless amount of practice and research on humanity. 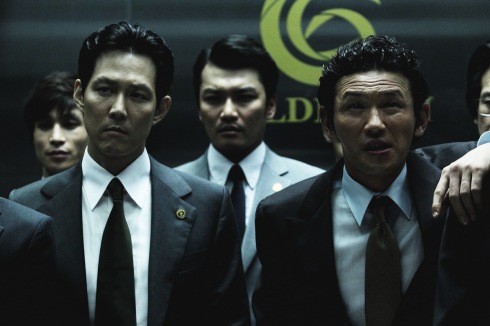 Taking the gangster genre and making it your own with a sense of mythic always has its upstarts. And granted with most of the exceptional material initially in the sector coming out of Hong Kong, it seems there are only so many distinct way to approach this element. They key is when one takes away fight sequences and blood and gore, there needs to be a solid backbone to the progression. Korea continues to show its prevalence in showing its acuity in finding and portraying these stories. “New World” approaches this progression from the viewpoint of “The Departed” which in turn got its original from “Infernal Affairs”. The tendency and test is one of loyalty but when the progression breaks down into half truths and lesser evils, the road always becomes a bit narrower.

Here, the balance of person in question is Lee Ja Sung who has been ensconced as a number two man in a crime syndicate simply biding his time before he can expose the criminals and bring them to justice. His handler in police captain Kang is one of both envy and pathos. What makes this relationship work is the interesting dichotomy of placing Choi Min-Sik, famous for the title character of “Old Boy”, one of the most acclaimed and country crossing breakout hits in recent Korean cinema, as this balancing character. He has his own agenda but is seemingly bemused by the whole progression.

While the rain soaked essence begins as mostly a farce in certain ways playing against tropes especially with the over-enunciated characters in Lee Joong-Chu and Jung Chung, both of which subscribe to an overindulgent sense of style and theatricality, the tension that builds towards the end, once Jung himself is played by Kang, brings out the brutality. In a tense scene inside a wharf edged warehouse, what initially seems to be a husband killing his wife and unborn child stuffing them into a oil drum seems to take on almost Shakespearean overtones. However, ironically enough, this is an unintended misdirect as we see Lee Ja Sung’s wife indeed survive (as she was mistaken for another character in this instance) but still as abruptly loses the baby, though not her life. 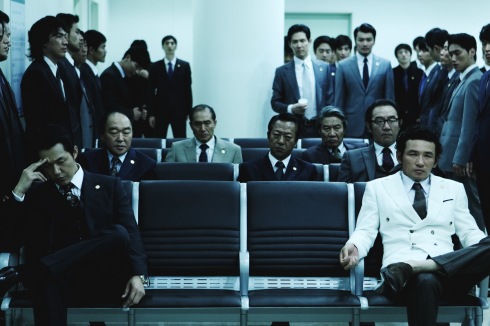 From this point onward there is an energy, most aptly seen in a garage in an out-and-out garage fight which does not use the tropes of fight combat or guns. It simply uses fists and bats, down and dirty, which progresses into an elevator where Jung, like Tony Montana, will spit in eye of his oppressors until the very end. The irony builds, especially on his deathbed, where a very specific forgiveness and baton is generated. This ultimately gives the picture a weight of a position unwanted but inevitable where decisions must be made and heads must roll simply to keep the piece, but done so in an effective, slick and well told way despite one glaring plot hole.