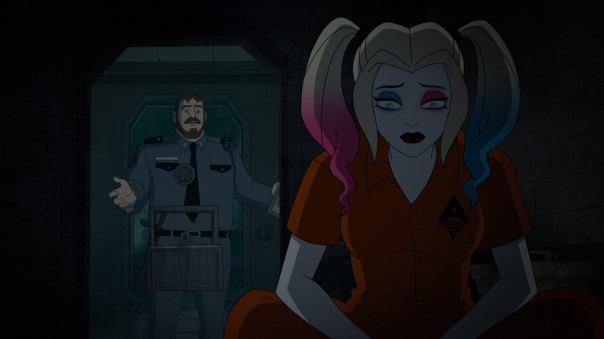 The intention of the second season of “Harley Quinn” was trying to reveal the true colors of many of the characters. As much as the series is a fun romp, the existential progression of what these people are going through reflects the adult themes that track in the messiness of life. While the idea of what Poison Ivy is going through is understandable in terms of expectation, the truth of Harley’s better nature is what fuels the episode and the season. The aspect of who is good and who is bad is obviously circumspect. The villains are villains more often than not when it serves the needs of the story so the whole archetypal aspect is slightly a kilter in terms of motivation. The adjusted “Thelma & Louise” structure and motif actually plays out quite well and the ending of the episode, without giving anything away, is undeniably cinematic and inventive using different angles and technology not seen in most of the season.

Unlike the big battle sequences which sometimes can be vague, the conclusion here uses exactly what is being seen to push the story and, as a result, gives the ending a much more emotional push. Granted many of the textures are soapy to a point. Clayman’s integration into it is quite telling and funny but it too plays to a trope of what it is. Truth and consequence is a paradoxical progression in this series and especially within this final episode: “The Runaway Bridesmaid” because Harley always leaps before she looks which is something that Ivy has to embrace but is reluctant to do so. Many of the other characters are trying to find their center. Jim Gordon begins a path to more of the dark side but again the stories sometimes shift so much that besides Ivy and Harley and maybe Joker in the last few episodes, the texture of the endgame is unclear. This, of course, doesn’t make the characterizations any less entertaining in their necessity and layers. It is just with understanding where the story needs to end, it is has to have plot connectivity. The season does, for the most part end, strongly but there are jagged spots in an overall view. A bit of control permeates the chaos.