The aspect of identity and loyalty progression is a cornerstone within the aspect of “Penny Dreadful: City Of Angels”. With Episode 5, “Children Of The Royal Sun”, it just depends what angle or space you run with. The disconnect with our lead character is his true paradox. He is caught between thoughts of different worlds and what rules they are governed by. That same critical thinking is in place with his partner Lewis (as played by Nathan Lane). The question becomes how far is a character willing to go for his beliefs and what is right before it becomes selfish and utterly self destructive. And what does selfish look like in that time period versus now. It becomes the balance of one’s own gratification versus the betterment of the community. Tiago (played by Daniel Zuvatto) is very aware of this and yet, his instinct plays him to the right point but his gut gets the better of him. This should be the truth of his relationship with Sister Molly but biology seems to take over there while secrets still abound between them (which should be questioned by someone supposedly as focused as he is). 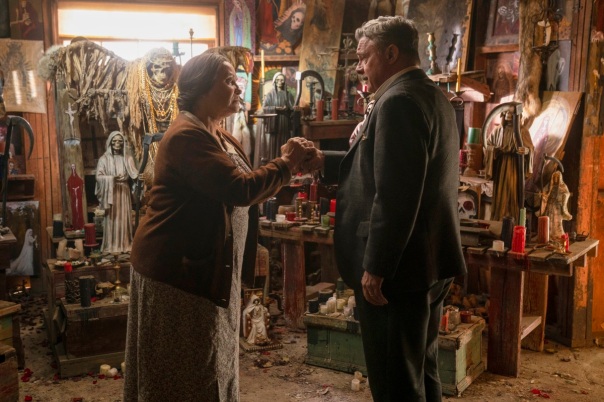 The question becomes which one is more important considering his sister has met with Molly secretly and yet blissfully unaware. The greater danger is in the the Goddess of Darkness who continues to stir up trouble. Finally one starts to see her in the guise of the office of the city council as the woman of change which was not as apparent before. Natalie Dormer continues to shine in this way. She pushes as in the case of the German housewife until she control the incandescent moral grounds through almost silent manipulation. Some are willing to go all the way but what is interesting is watching Nathan Lane’s Lewis and his response when life or death becomes a choice. There is an inherent human nature of characters that is pushed by temptation more than others. The darkest point maybe is Mateo but again even with his quest and need, it is pushed by temptation. And again the goddess of darkness knows what buttons to push to get him there to the final path. The question becomes what is Darkness playing to versus the eye of Sante Muerte. She has tagged Tiago in a way as the Chosen One but it depends what ruin his path leads to.