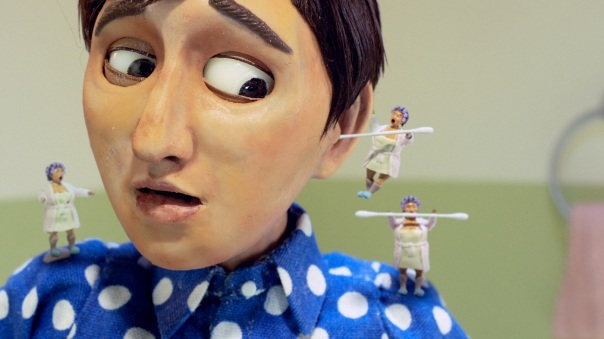 The aspect of reflexivity especially in animation is an interesting portrayal of the Id. With “The Shivering Truth”, the episodes take this and shape it into abstract textures to relay an idea. Granted some of those stories portray almost a fascination with isolation and internal strife. In truth, most people most of these episodes after midnight but the ideas are sound in almost their Freudian mentality. In this episode, “Carrion My Son” our lead character simply wants to get something for himself but in doing so an establishment which he frequents in giving him what he wants in fact gives him the one thing he does not want. The reflection on this lad’s relationships seems to wither away as it becomes a sort of reverse Gulliver’s Travels with claws. Yet, in another tenet of Freud, the father’s sins beget the son’s in a certain way and yet there is no escape. Eventually the bastion of progression can be acceptance or simply an understanding. There essence of creation and destruction again plays readily here as if one and the same exists both in the character’s mind almost in his resistance to existence.