The motivation of “The Hustle” is based in the texture of “Dirty Rotten Scoundrels” which was a film in the late 80s starring Michael Caine and Steve Martin. While the tropes it played are a little out of date and less politically correct now, the re-imagining from the point-of-view of female grifters is a sound one. Spearheaded likely by Rebel Wilson against the foil of the more sophisticated Anne Hathaway, the aspect of one upping keys in the play but the tonal element is tricky. Wilson flails a lot in her performance whereas some comediennes can make it a little more fluid. She seems like she is trying too hard. But then again there is a small texture of that in Anne’s performance though when she gets frustrated with Rebel’s less accomplished con woman is when her true acting shines. 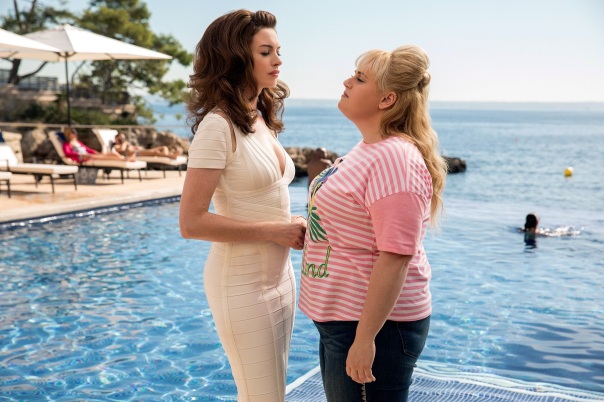 The key in this kind of comedy is obviously the heart and how it shines through without being too melodramatic. To Rebel’s credit, this starts to shine towards the end of the film simply because of the progression of story. The contrast though is too stark. Hathaway is good at this and gets to show her continual mastery of accents but it never rises truly to the level it could. This might inherently also be the fault of the directing. The film, despite being entertaining at times, feels slightly scattershot despite the beautiful surroundings. Hathaway’s employees truly get the performances right which is more a European structure of comedy in the fact that it is slightly underplayed but with a definite hit. This is where the diverge lies. The eventual revolution in a mark is expected but plays almost against the realization because it skirts the idea of the status quo. That said, “The Hustle” doesn’t necessarily want to be anything more but, as it is, it does its job plainly.