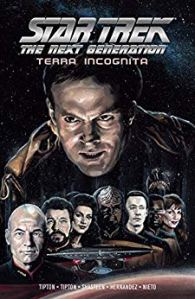 The coalescing of the overall structure of the “Star Trek TNG: Terra Incognita TPB” [Scott & Arthur Tipton/IDW/147pgs] storyline gives a more rounded view of the inherent motivation of the characters. While the different issues go off in different directions in terms of character beats, the Barkley story does have resonance in terms of its more basic existential versions of self, and the idea of the alpha and the beta. The fact that many of the crew tend to like him more in a mirror self than his more sensitive regular self points to a structural point of the ID. This is also reflective in one of the issues within this TPB that explores the passing of a Katra after a summit gone wrong that leaves a Vulcan dead. A younger Vulcan doctor makes a judgment call after speaking to Picard who interrelated his mind meld with Sarek and what that allowed them to accomplish. The backdrop of this is interrelated to a peace negotiation between the Federation and the Cardassians. The background of that of course fuels what is going on on in subtext in the mirror universe which has interrelated in both the TNG and Voyager storylines. It involves classified tech which is not available in the mercenary universe which revolves less in R&D and more in industrial espionage. Ultimately it is the infighting and insight by both Riker and Picard which allows the Federation Universe to get the upper hand although simple human error always is a variable. “Terra Incognita”, in a continuing perception both of command education, priority contact and simple diplomacy between disparate species, is an interesting if not disjointed continuation of the issues that plagued but also enhances the voyages of the Enterprise D.