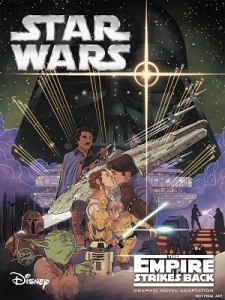 Looking at a new adaptation of the classic film “The Empire Strikes Back” [Alessandrio Ferrari/IDW/84pgs] in many ways in an interesting exercise in what is kept in in terms of dialogue and what parts are removed for elements of pacing and space. In this instance while some aspects work, certain others of nuance are lost. Point in fact, on Dagobah, Luke’s initial ignorance of Yoda because of his arrogance is a very specific notion as is the cave where he sees the reflective image of his father. These are small scenes but also at times the most telling and mythic although with comic adaptations, the main story points need to be adopted and compacted. Also some of the smallest character moments for Han & Leia happen in the quiet moments on the asteroid. Now granted the main point in the carbonite scene is the most telling but some scenes need to breathe. That said the fluid nature of the characters especially Leia give them a more modern edge (much like the “Solo” graphic novel adaptation) placing it somewhere between the original concept and the arena of “The Clone Wars” TV series. Either way, always great to see another conception of a cultural touchstone most people have seen or have a perspective on.