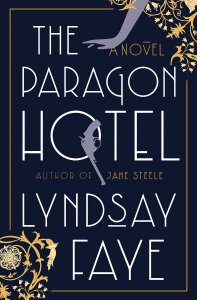 The essence of “The Paragon Hotel [Lyndsay Faye/G.P. Putnam’s Sons/432pgs], shows a texture of different lives being lived in the essence of a period piece with a very relevant social message. Above all, within the structure, Alice “Nobody”, who grew up as the daughter of a sex worker in 1920s Harlem, shows an interesting dichotomy of structures. The texture of the gangster landscape and of innocence lost serves strictly as the set up and not the rule of thumb. Nobody knows who she is inherently at the get go and what she is good at. Her life was never meant to follow that of her mother but to disappear into the ether with a sense of knowing. It is her circumstances and her strengths that allow her to evolve within the idea of who she could be which is inherently a spy for the mob. The balance of the story teeters from her old life in Harlem and what caused her to escape under physical duress on a train to Oregon to the rightly named Paragon Hotel, where everything is perceived from altered angles. The social upheaval there gives an interesting parallel to her situation but in an all together different perception of tolerance and understanding. All the people within this structure are not necessarily good people but they are creatures of circumstance, Blossom Fontaine is one of the most interesting parallels considering her backstory. Alice ends up being the unwanted resident of an all black hotel in Portland undergoing its own sort of intrinsic social battle and persecution. The author gives a view into the racial strife suffered by the residents there despite the location being in the Pacific Northwest. The intrinsic nature of the KKK, its perceived influence and the balance of behavior because of different progressions of time especially involving the wife of the chief of police: Evy and a young colored boy: Davy who goes missing, create the the conflict and propelling nature of the story. However it is the intrinsic nature of the relationships of Alice and their psychological structure, specifically with her childhood friend Nicolo in Harlem in direct relation to her burgeoning friendship with Blossom, a cabaret performer that really make the story work in addition to her gangster guardian: The Spider, who both creates and destroys her despite his best intentions in the same breath. The different personalities in the Paragon Hotel from the cook to the elevator operator to the head of the house also paint a very vivid portrait because the puzzle pieces don’t fit together at all yet they still operate as a whole. Even Alice’s guardian angel in Portland, Max, a lieutenant from the 1st World War turned porter, who in a matter of fate saves her despite the danger to his own person (in saving a white woman who is undeniably in pain in an arena where it might have been better left alone) parallels a similar structure which propelled “Mudbound”, a Netflix film set in the same period starring Jason Mitchell and Carey Mulligan. Ultimately “The Paragon Hotel” is a novel about identity and how one changes to fit a certain idea yet the truth of the personality always creeps through to the surface,’